World of Tomorrow - No Salvation: https://youtu.be/dfbvdRx1Mjg 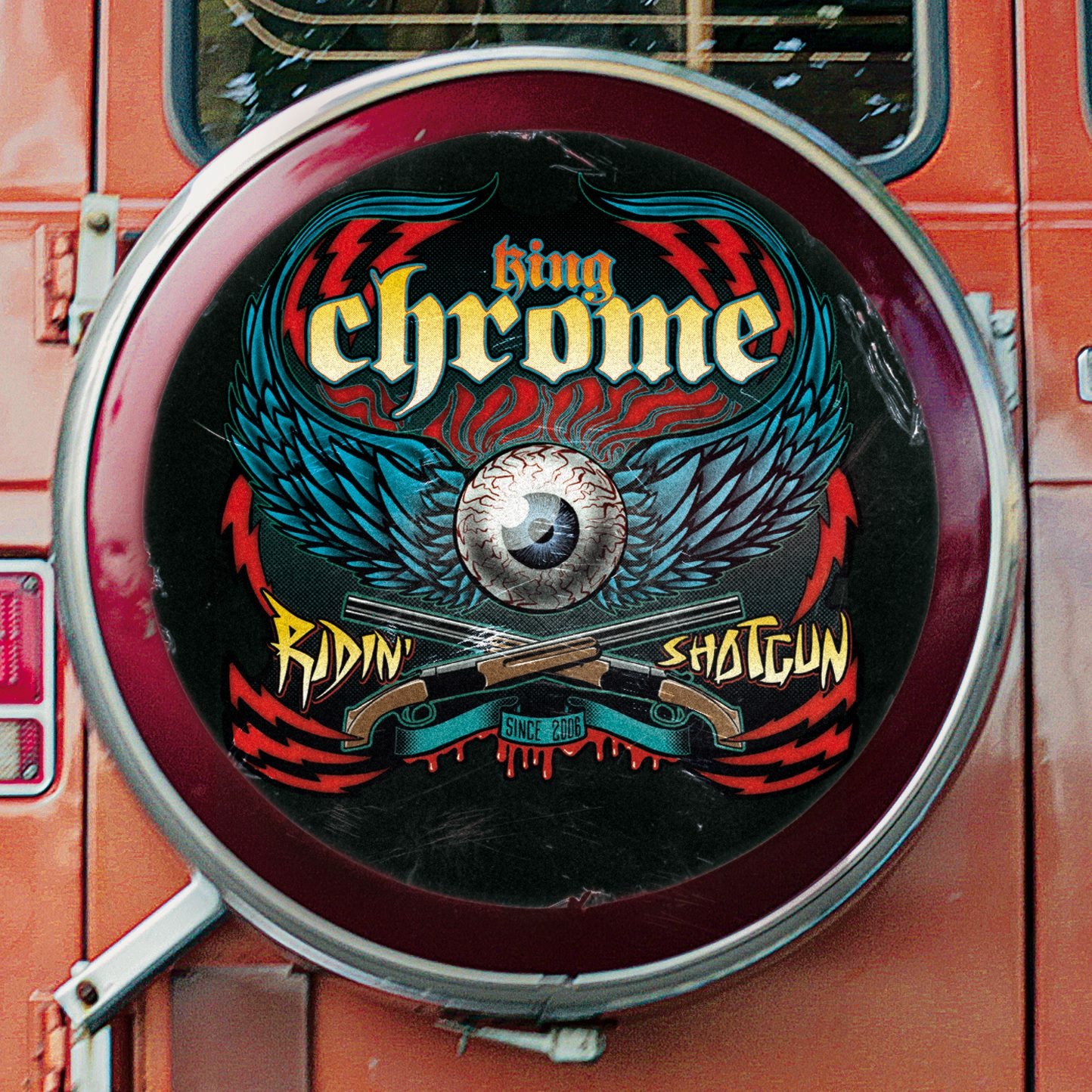 Heavy guitar riffing feels like a brutal slap in the face

Stereotypes? Conventions? Hell, no! Sense of tradition? But of course - the 13 songs on Ridin' Shotgun by CHROME KING honor many distinguished names in Metal: One believes to be reminded of Metallica, Hatebreed, Pantera and Anthrax. With its second album the Stuttgart based four-pack delivers once more an impressive momentum in telling buttoned up critics and metal-traditionalists to fuck off. It appears on the July 8 through the Stuttgart based label Bleeding Nose Records.

No wonder that even one of the big ones gets all excited. Joey Z, cofounder of the New York based band Life of Agony, goes into raptures over these four blokes: "Really digging the fact that KING CHROME has an original sound and style. It's not very often lately that I hear a band take chances." With that he summons up the quartet's style; they themselves call their genre Fukk-U-Core. Meaning: We give a shit about (almost) anything!

Frontman and guitarist Jakk Daviz is very proud of the new album: "In comparison to our first record we clearly outdid ourself's on Ridin' Shotgun." The songs are more versatile, more profound and more structured. And the lyrics actually seem to be carved out of reality. Fury and grief, criticism of politics, religion and authority - "they read like a cross section of our life, like a summary of the last five years", explains Daviz.

This life reports about hard work, stresses and strains. And hands which aren't spared in the everyday life also do not go easy on the instruments. One hears this – the sound is rough, edgy, very close to the listener. Hardcore, Rap and now and again even Blues weld this Old-School-Metal into a tantalizing mix. Shouter Jakk Daviz punctuates this surprising inferno, hammers the lyrics together like square timbers turning them into weapons. It's refreshing archaic and antiauthoritarian at the same time.

After years of travel the four are a confirmed team. Since their early days in 2006, at that time still simply called Chrome, they've rocked the stage. Since the renaming in CHROME KING in 2008 they have performed countless times in Germany, in Belgium and on a three-week tour in Finland. They supported bands like the rock and hardcore punk veterans Corrosion Of Conformity from North Carolina and the Swedish Prog rockers Graveyard. Also KING CHROME appeared alongside names like Testament, Sepultura and Hatebreed.

Apart from that CHROME KING rocked festivals like Metallergrillen Open Air and the Ragnarock Open Air. On occasions like this these guys stand on stage in their characteristic worker shirts which barely hide their tattoos. However, the outfit is the only choreographed part in a KING CHROME show. "We do not pretend or deliver planed actions. No posing. Simply real!" comments Jakk Daviz. Instead he grooves, thrashes and hardcores with guitarist Marko Sirac, basisst Sasch K. and drummer Fry until the stage beams bend.

This daunting energy is to be heard up to now on four publications - three EPs (Chrome, in 2007, King Chrome, 2008, and the 2012 Soundmann Sessions), as well as the debut album from 2011: Whatever It takes. Ridin' Shotgun joins them on the July 8 as number five. It might earn similar recognition as the debut, which the magazine Legacy called a "first-class soundtrack with catchy melodies". And the online- platform Metalschädel.de stated: "Who digs sudorific, melodic riffs, blistering rhythm sections and an overpowering singer, is well served with this band."

"Mindead" will lift-off with their strong album "Controlling the tides". The four guys from Germany let the predecessor "Abandon all hope" from 2008 behind and present "Controlling the tides" a New Metal / Modern Metal first-class firework. From energetic Riffmonsters to soulful ballads takes the listener a facility arranged song material packaged in a modern sound.

MINDEAD play a gritty kind of modern metal with lots of passion and unique flavour. The fourpiece from Southern Germany knows what it wants - and knows how to convince its critics.

Frontman Timo Fielker and drummer Benjamin Hölle met in 2001 to turn the MINDEAD concept into sound. Right from the beginning the focus was on rhythmic metal that would thrill with anthemic character. MINDEAD were quickly established in the local scene surrounding Ludwigsburg and Stuttgart. The next goal was to break free from the confines of local stardom: the debut album "Abandon all hope" was released in the late summer of 2008. The album boasts eleven highly energetic tracks.